The Tale of Bro Kwon’s Booty

Embark on a treasure hunt for Bro Kwon’s booty 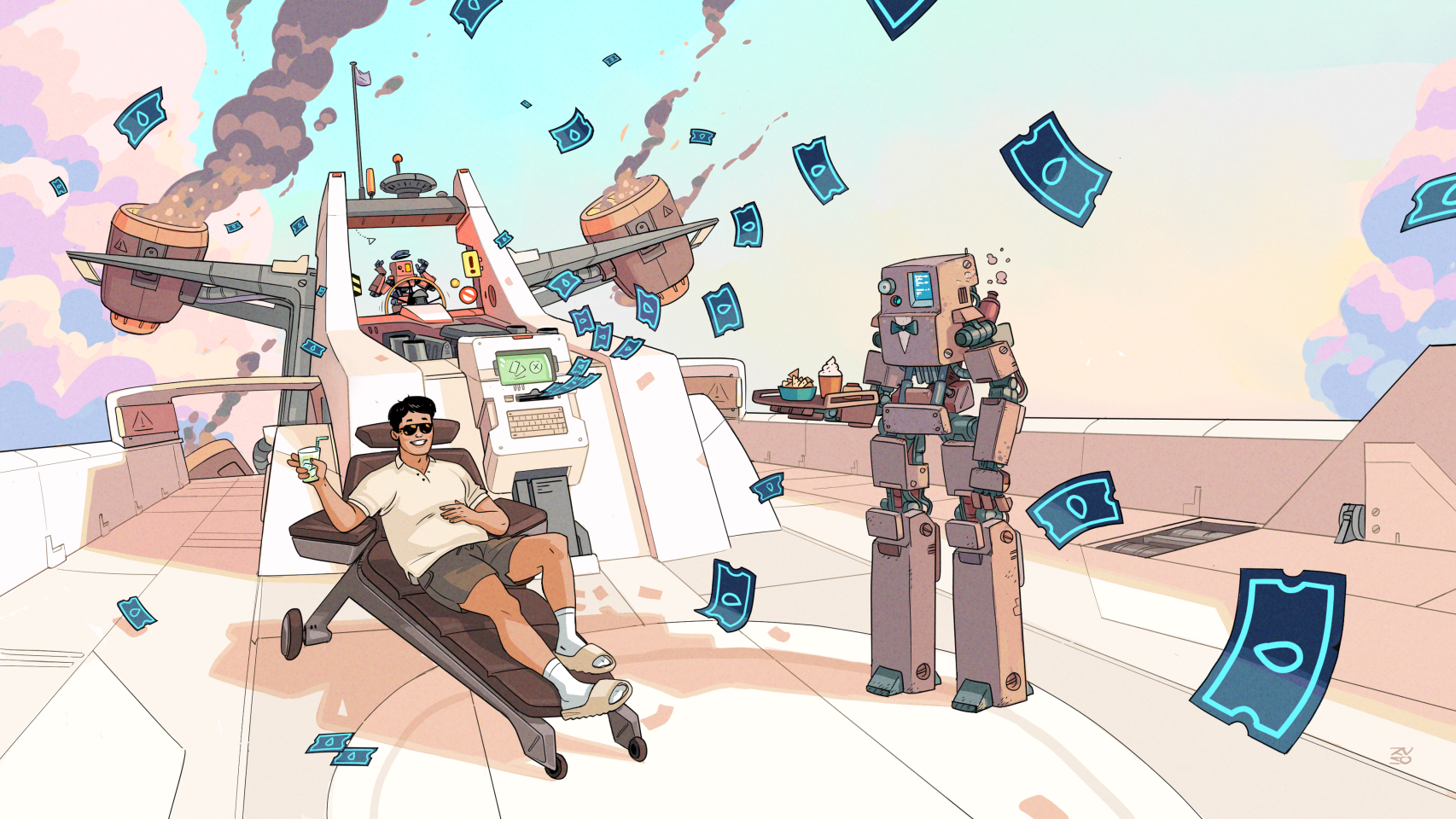 When we last heard from our heroes, Alice and Bob had washed ashore on a deserted atoll, having played a key role in helping take down Bro Kwon. A lone toucan has just led them to a mysterious crate. Together, they crack it open and discover a strange artifact. Our story is just beginning…

Alice and Bob need help recovering the scattered crates holding Bro Kwon’s lost booty. They suspect many of these crates have sunk to the bottom of the seabed along with Bro Kwon’s downed yacht, but others were surely swept along with the rough waters and deposited across the furthest reaches of Shell World.

Bob gets his diving gear ready. Alice, however, notices that if she follows the flocks of squawking toucans, they have a tendency to lead her directly to the heaviest crates—lodged amidst craggy underwater reefs or washed up on lonely islands.

To retrieve a crate, navigate to the “Booty” tab in the Shell app. Select the number and type of crates you want. Bob estimates there are 20,000 Sunken Crates, 10,000 Rare Crates, and 5,000 Mythic Crates.

Anyone can retrieve a crate, but you’ll find that simply having toucans in your wallet allows you to access the rarer crates—the more toucans you have, the rarer the crates you’ll be able to find. You don’t need any toucans to hunt for a Sunken Crate, but you’ll need to enlist your Government Toucan friends to help you seek out the Rare Crates (which require 1 toucan) and the Mythic Crates (which require 3 toucans).

Each crate contains a single artifact. To reveal the artifact, you need to open the crate. This will burn the crate NFT and mint a new (random) artifact NFT. Remember: once revealed, you can’t put the artifact back in the crate!

Some artifacts are rarer than others, as Alice has tracked in her private artifact database (see the bottom of this post). She believes the Rare and Mythic crates are more likely to contain more powerful artifacts.

Crates and artifacts are NFTs. You can buy, sell, and trade these on any NFT marketplace on Arbitrum—but only until the artifact is activated.

Activating an artifact will tap its power, instantly supercharging your wallet with its special ability. But remember, once you activate an artifact to unleash its power, the NFT is burned—meaning you won’t be able to trade the artifact anymore.

Wondering whether to activate an artifact? Here’s everything we know about their powers:

There are five different quota expanders that, when activated, will permanently increase your token quotas. (You will need some token quota if you want to earn Shell Points!) Each type of expander has a different level of power: Smashed Expander (good), Standard Expander (great), Chunky Expander (fantastic), Expando-Chad (unbelievable) and Bro Kwon’s Mastermind (holy Satoshi, this is awesome). You can activate as many expanders as you want—each one simply adds additional quota to your token quotas. 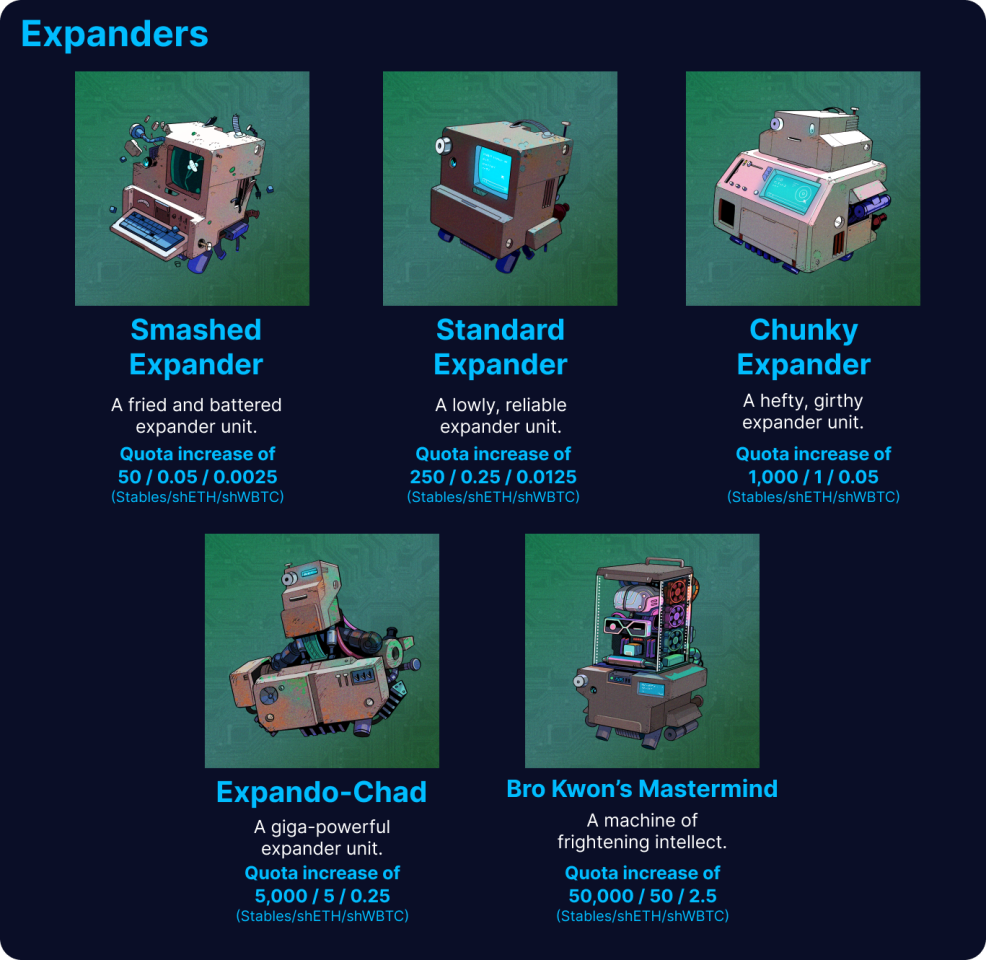 Boosters temporarily increase the rate at which you earn Shell Points. (Remember, you can’t earn Shell Points until you first have some amount of token quota—and you’ve deposited some tokens in there!)

There are four types of boosters: Mini Booster (2%), Main Booster (3%), Hyperbooster (5%), and Hand of the Accountant (15%). Mini and Main Boosters last ten days each, while Hyperboosters and Hands of the Accountant last thirty days each. You may activate multiple boosters simultaneously, so long as they are of different types (for a maximum 25% increase if all four are activated at one time).

If you activate two or more identical boosters, note that their powers will be applied consecutively over time, rather than simultaneously together. In other words, you will wait for the first to expire, before the next booster starts. For example, if you activate five Hyperboosters at the same time, you will get a 5% boost over the next five months.

Miscellaneous items don’t currently increase quota or point boosters. In fact, Alice doesn’t think they’re good for anything—whenever one of these items tumbles out of a damp, creaky crate, she rolls her eyes and mutters about all the clutter. But Bob disagrees. He thinks they’re worth holding onto for something bigger… 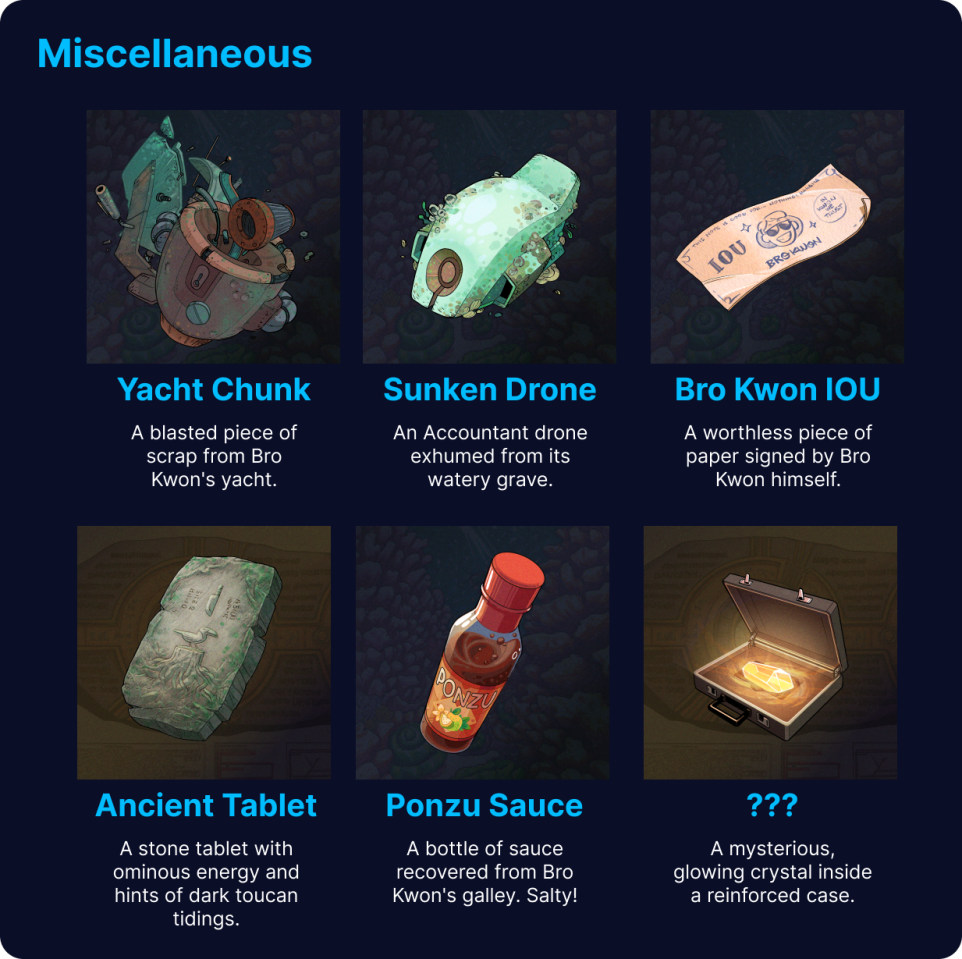 What’s the difference between the Sunken, Rare, and Mythic Crates?

The only difference between the crates is the drop rate (probability) for containing powerful artifacts. Sunken Crates have a standard drop rate; Rare Crates have a slightly better drop rate and Mythic Crates have the best drop rate. Refer to Alice’s rarity table for details (see below).

Is it random or predetermined which artifact will come out of my crate?

Random. Alice’s rarity table only tracks the probability of discovering any particular artifact in any particular crate. Whenever you open a new crate, it’s like rolling dice—anything could happen!

Are the crates and artifacts NFTs?

Give me the details of the NFTs.

What the heck are these miscellaneous artifacts?

The potential is not always immediately apparent. But we sense something exciting in the future… 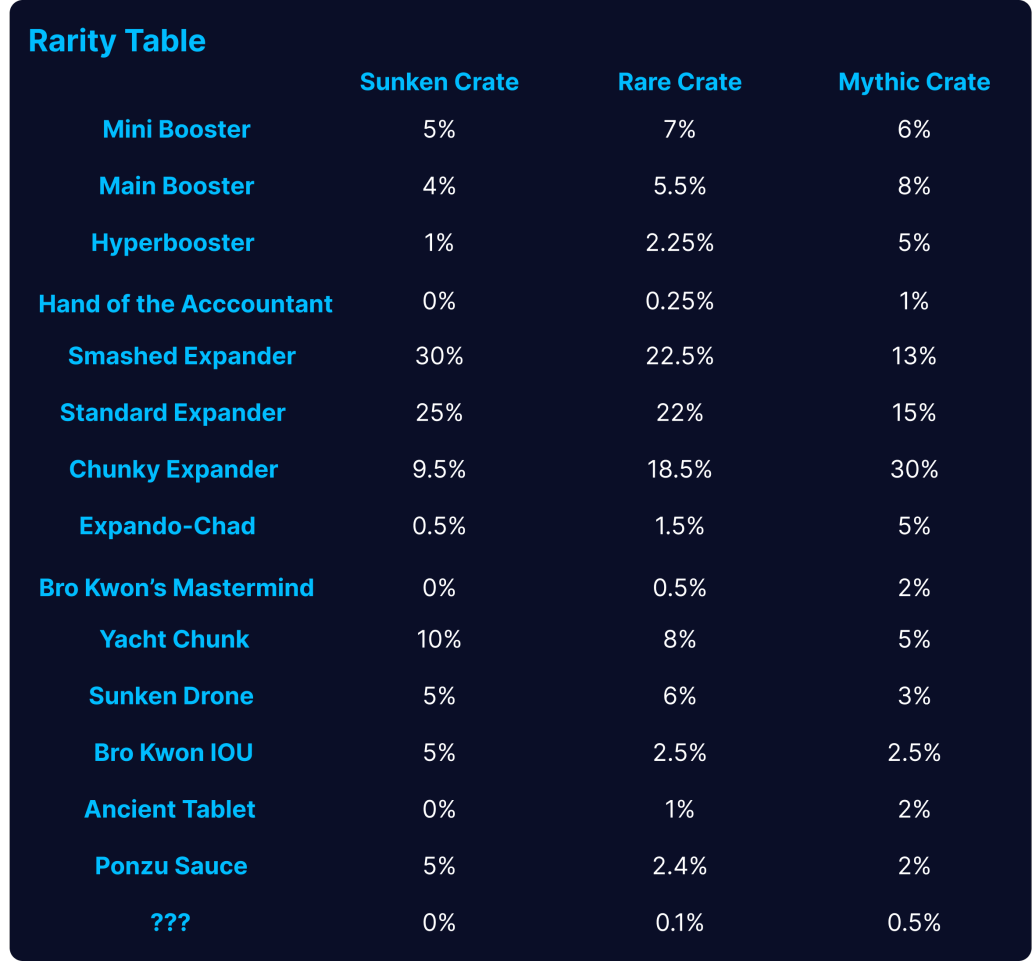