Signals from the Deep 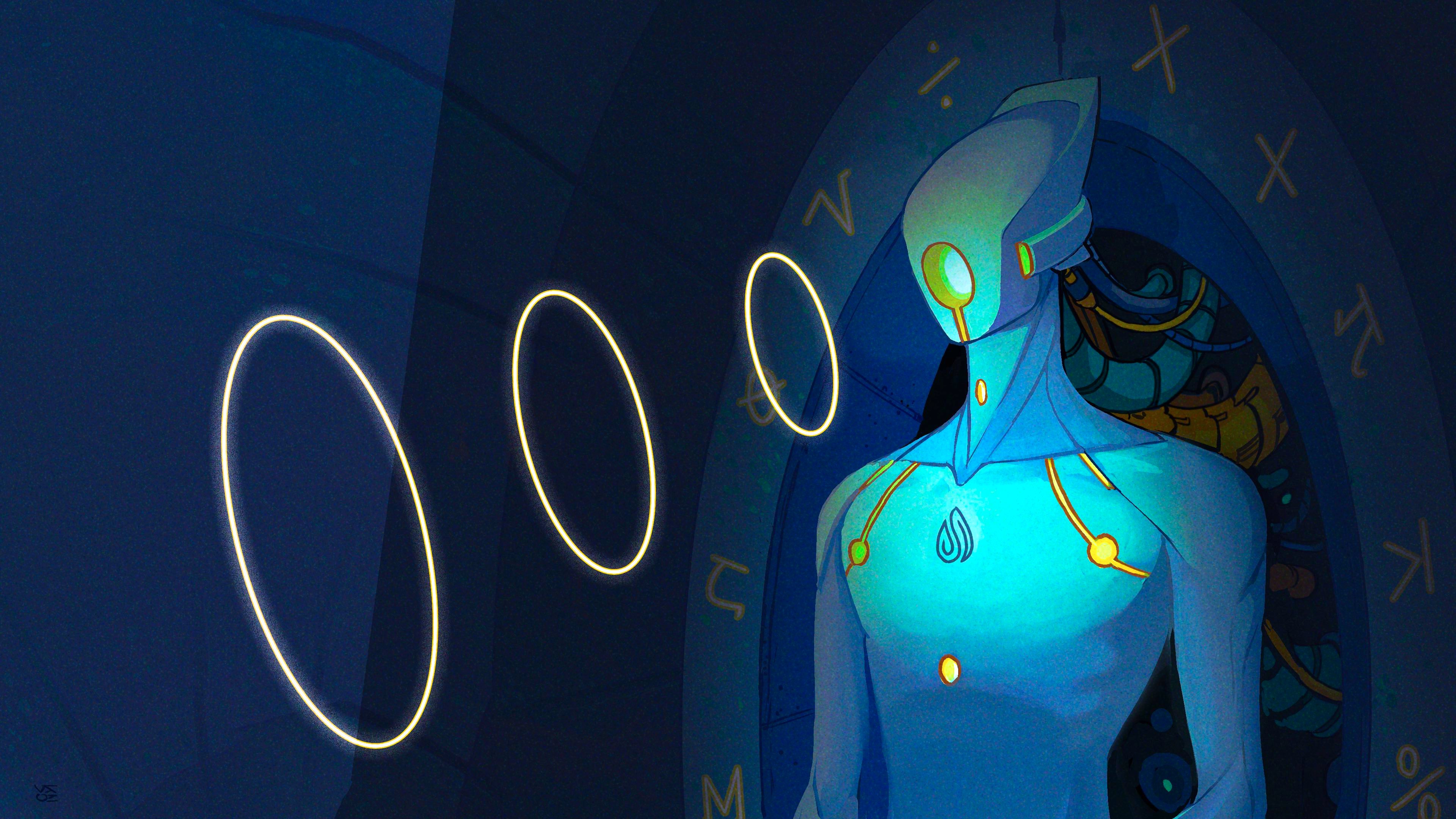 This is an ongoing blog post which will be updated regularly in the time leading up to the launch of Shell v2. Follow the Shell Protocol Discord and Twitter to get regular updates when new sections are added to the post.

There's excitement in the air in Shell World this week. Alice and Bob having been watching the Accountant's drones complete their tasks, and Alice is pretty sure that the final testnet activation is coming soon. There's energy building in the system, and more Arbinauts have been arriving every day to prepare Shell World's connection to the Arbitrum network.

Today, however, something seems strange. A new radio signal has emerged from the depths of the Ocean, constant and strong. Alice analyzes the pattern on her scanner, and Bob can't help but wonder if this is the voice of the Accountant itself.

Alice thinks it must be a testnet announcement. Bob isn't so sure. The Accountant's network activity patterns seem different today, and he's noticed extra power being diverted to the Ocean's more distant monitoring posts. He'd like to go investigate, but Alice convinces him to stay. She's got all her gear set up for the testnet, and she doesn't want to miss the big activation.

Whatever strange occurrence is building in the waters of Shell World, it seems it will remain a mystery for today.

A green blast of energy washes over Shell World. The final update to the Ocean network's testnet is live! Thousands of toucans flock from the trees, filling the skies with color. Alice locks into the network and watches her device start filling with testnet Shell Points.

Bob, meanwhile, is still focused on decoding the Accountant's message. It doesn't seem like a warning, but it's clearly an indicator of some nearby anomaly. More clusters of Accountant drones fly out toward the horizon, following their undersea controller's secretive orders.

Unable to crack the code, Bob makes his case to Alice. Why not follow the drones to their destination? She can leave her testnet system running while they take a trip to sea to explore the mystery. After all, her Shell Points will continue to accrue on their own.

Alice gives in. He's waited long enough, and the chance to track the drones is quickly slipping away. As they pack their bags, she makes her own attempt to decipher the Accountant signal. Just at that moment a brand new message comes through.

The code is unclear, but the effects are obvious. A hundred more drones rise from the trees and fly in clusters out to sea. Bob points out that this is the best chance to chase them, as long as their boat can keep up. Alice says it would take a pretty daring captain to run a seagoing skiff as fast as an Accountant drone can fly. Luckily, Alice is a pretty daring captain.

They throw their bags in their skiff and push off into the water. Bob tracks the closest cluster of drones, and Alice sets the throttle to its limit. Once again, the two embark in search of new adventure.

It's a long trip out to sea. Alice and Bob's home islands of Shell World grow faint behind them as they follow the path of the Accountant drones. Bob takes a turn at the helm while Alice goes through her tools. Soon, she gets distracted with her testnet connection, watching her Shell Points grow. It takes a nudge from Bob to bring her back to reality, and he tells her there's something out on the horizon.

Alice can't quite see it with her bare eyes. She runs to grab her binoculars, and Bob slows the throttle down so she can get a clearer look. Sure enough, there's a ship ahead. It's long, tan, and spewing black rocket exhaust as it hovers above the surface of the Ocean. Alice doesn't think it looks like an Accountant ship, and Bob agrees.

Bob sets up skiff's communication system. Holding the microphone, he transmits a message to the strange rocket ship. Could this be what the Accountant's drones are looking for?

For a moment, there's no answer. Then, to Alice and Bob's surprise, a haughty robot voice comes through the line with a threatening tone.

Bob tries some diplomacy, but this 'Mastermind' doesn't respond. More rocket thrust pours from the engines of the ship ahead, and soon it races out to sea much faster than the skiff or the drones could possibly chase it. It seems the trail has gone cold for now.

Alice and Bob prepare to turn back. Then a strange sensation makes the hair on their arms stand on end. Alice soon realizes it's an energy pulse from a nearby Ocean tower. Something's causing the power in the network to surge, and it's getting more unstable by the minute. They might not have long before the entire region overloads.

Alice hauls the wheel right to avoid a huge wave. Bob rushes to push more power to the skiff's onboard pumps. Whatever's overloading the Ocean network is causing some serious chop! After a harrowing race away from the nearest tower, Bob spots a small, rocky island. It's got a ramshackle fishing town on its beach, and a natural harbor to protect docked ships from the waves.

Bob suggests it might be a good spot to wait out the energy storm. Alice disagrees. The island, after all, is a known hangout of gray hat hackers and ruffians. Then another huge wave wallops her at the helm. Eventually, soaked and eager for a break, Alice concedes that safe harbor does look appealing.

The two drop anchor at the dilapidated jetty of the island. Lights are on at a dockside tavern, and Bob can already hear a rowdy scene inside.

Bob makes a case for checking out the tavern. Alice isn't interested. She'd rather climb to the island's peak and try to get some energy readings. Maybe then, she suggests, an answer to the Ocean network mystery might present itself.

The two split up. Alice grabs her climbing gear, and Bob heads inside the tavern for a bite to eat. Immediately, he spots a familiar pair of eyes staring from a booth in the back...

Bob tells Eve that Alice's whereabouts are none of her business. Eve only laughs. Begrudgingly, Bob sits, and she tells him that she's here to scope out her next big win. There are just six days, rumor has it, until the Shell World network comes online for good. Who knows what opportunities for plunder and enrichment might present themselves along the way?

Bob reminds Eve that she should keep all her antics on the up-and-up. After all, you never know when the system might bring the hammer down on a troublemaker. Eve laughs and tells Bob not to worry. She's got a plan to use her bots to chart paths from node to node, helping out travelers and making a pretty penny in the process. Then again, she says, that other guy does look like a pretty juicy mark...

Other guy? Bob is curious now. He wonders if this might have to do with the Mastermind's transmission. Eve explains that there's some hothead running around with a bunch of robots, bragging to everyone he meets. Apparently, he thinks he's found a way to siphon energy from the Accountant all for himself.

Bob presses her on the mysterious man, but she refuses to elaborate. All he gets is that same old mercurial smile. Outside, the energy storm batters the tavern windows even harder than before. Bob pauses. He looks to the rain pouring down the glass, and to the rocks beyond.

Braving the storm, Bob exits the tavern. He barely keeps his balance on the loose rocks of the beach. At least the skiff in the harbor looks intact. Craning, he looks toward the steep path where Alice ascended. Then his blood goes cold. At the top of the cliff, her climbing bag sits alone. Alice herself is nowhere to be seen.